They have been a familiar sight around the lake in Prospect Park in Brooklyn: Canada geese, scores of them. To some residents, the birds and their fuzzy offspring are charming hints of wildlife amid the bricks of the city. Recently, when one was found with an arrow through its neck, park rangers tried to corral it to administer first aid.

But then, over the last few days, parkgoers noticed something strange.

The geese were gone. Nearly 400 of them.

On Monday, the answer emerged. Wildlife biologists and technicians had descended on the park Thursday morning and herded the birds into a fenced area. The biologists, working with the federal Agriculture Department, then packed the geese two or three to a crate and took them to a nearby building where they were gassed with lethal doses of carbon dioxide, Carol A. Bannerman, a spokeswoman, said.

Ms. Bannerman said the measure was necessary. “The thing to always remember in this New York situation is that we are talking about aviation and passenger and property safety,” she said. “In New York City, from 1981 to 1999, the population increase was sevenfold.”

The authorities have been thinning the region’s ranks of geese since some of them flew into the engines of US Airways Flight 1549 in January 2009, forcing it to ditch in the Hudson River. Last summer, 1,235 were rounded up at 17 sites around the city and later killed. But the Prospect Park culling appears to be among the biggest, and its scope mortified some residents.

“It’s a horrible end,” said Anne-Katrin Titze, who went to the park nearly every morning to feed the geese. “It’s eerie to see a whole population gone. There’s not one goose on this lake. It looks as though they’ve been Photoshopped out.”

Ms. Titze and her partner, Ed Bahlman, noticed that the geese were missing on their regular trip to the park on Thursday. The couple found plastic zip-tie restraints in a pile near gosling feathers. They learned what had happened to the geese from news reports on Monday.

“The fact that this was done without letting the public know is the first concern,” Mr. Bahlman said. “There were so many people in the park over the last four days who noticed the geese were gone.”

In recent weeks, the Canada geese have begun their annual molting, meaning they could not fly. Their capture was timed to the molting.

Susan Elbin, conservation director at New York City Audubon, was cautiously supportive of the mass euthanizing. “There are ways to manage birds nonlethally,” Ms. Elbin said. “But if you’re trying to manage a population level, sometimes those hard decisions need to be made.”

The goal is to eliminate most of the geese within seven miles of the major airports in the region. Prospect Park is 6.5 miles from both La Guardia Airport and Kennedy Airport.

Seth Kaplan, a teacher who lives two blocks from Prospect Park, said he was crushed when he heard what had happened. Mr. Kaplan, who spends nearly every day in the park, had recently circulated a video of the goslings.

“It’s really important to remember that the Canada geese that collided with Flight 1549 were tested by researchers at the Smithsonian and they were not populations that lived in our area,” Mr. Kaplan said. Most of the Prospect Park geese that were gassed were resident.

Gone in the roundup, apparently, was a goose known alternately as Sticky or Target, who was discovered with an arrow through his neck last month. Park rangers tried and failed to catch the bird in a bid to nurse him back to health.

A goose found last year with a damaged beak, which Brooklynites living near the park had tried to help, was also believed to have been killed.

City parks officials granted signed permission for the removal of the birds but said they had not been notified of the specifics. They declined to comment further, referring the matter to the Agriculture Department.

Over the weekend, four geese were spotted in the lake.

Most of the geese at the park were probably year-round residents, said Paul D. Curtis, an associate professor of wildlife sciences at Cornell University. Dr. Curtis said there were two types of Canada geese in the region: those that migrate north to nest during the summer and those that stay close to the city. Even to biologists, Dr. Curtis said, they are nearly indistinguishable.

In the early 1900s, Canada geese were nearly extinct. In an effort to rebuild the population, they were brought to New York from the Midwest. In the 1930s, geese were added to be hunted.

Agriculture Department specialists started removing geese this year in mid-June. They expect to complete their schedule of roundups by the end of the week, Ms. Bannerman said.

Elsewhere in the country, nuisance wildlife birds are usually chased away by border collies or firecrackers. But in New York, Ms. Bannerman said, there is no relocation program for the geese, and they must be euthanized. Another method for controlling the birds is coating their eggs with corn oil, to prevent them from hatching.

The carcasses of the Prospect Park geese will be double-bagged and dumped in a landfill. Other states use different methods, like turning the geese into food or animal feed. This year, the Agriculture Department donated 900 pounds of goose breast to food pantries in Pennsylvania. 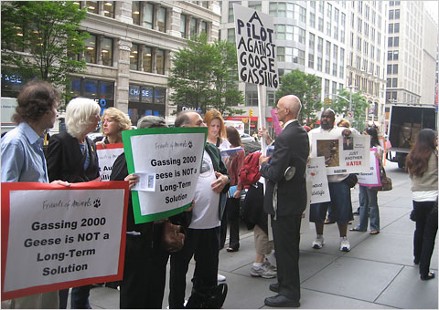 Demonstrators protested a proposal to remove at least 2,000 geese from more than 40 city-owned parks and other sites within five miles of the city’s airports.

Just a few blocks north of Union Square, a crowd gathered outside the headquarters of the Port Authority of New York and New Jersey on Tuesday afternoon to protest New York City’s plan to kill at least 2,000 geese during their molting season, a time when the geese cannot fly. The protesters accused the mayor’s office of planning the action in secret, in conjunction with the federal Agriculture Department and the Port Authority.

The Port Authority brushed off the protest, insisting that the culling was necessary to prevent bird strikes — and adding a rhyme for good measure. “Our responsibility is to think about safety for people before peace for geese,” a Port Authority spokesman, Stephen Sigmund, said.

The authorities announced the plan to kill the geese on Thursday, in response to the bird strike that resulted in the nearly disastrous ditching of US Airways Flight 1549 in the Hudson River in January. The first 100 geese were killed on Monday.

The protesters asserted that the geese culling was both inhumane and ineffective.

“This is absurd,” said Edita Birnkrant, New York director of Friends of Animals, the group leading the protest. “This is not going to solve any problems. This won’t make planes any safer.”

The geese that took down Flight 1549 on Jan. 15 were migratory geese, while the geese that are going to be killed in the next few weeks are resident birds, the protesters pointed out. The disruption of their habitats would not have prevented the accident in January, they said.

Ms. Birnkrant said that the Port Authority was “passing the buck” and that officials there told her they “would have” looked into nonlethal methods, but the decision to destroy the birds had already been made by the Agriculture Department. Ultimately, Ms. Birkrant argued, it was up to the mayor to approve the action.

“This is a terrible precedent to set, that anytime there is a problem with wildlife — to just slaughter them is not a way to solve the issue,” she said. The Humane Society of the United States says that Canada geese can be effectively managed with nonlethal techniques like aversive conditioning, egg addling and landscape management.

At the protest, as many as 30 people chanted slogans such as “How many geese did you gas today?” Asked whether the protest was having any effect, Ms. Birnkrant said: “A lot of people are giving the thumbs up and are supporting us. Some people don’t even know that this is going on.”

For their part, the authorities have said that the removal of the geese is necessary and comes on top of other steps to protect the aviation system.

“This new initiative will build on measures the Port Authority is already taking to eliminate wildlife hazards at the airports,” Chris Ward, the Port Authority’s executive director, said in a statement last week, “including the installation of a state-of-the-art bird radar trial program at J.F.K. Airport, hiring a second wildlife biologist — two of only seven airport biologists in the nation — expanding shotgun training for field supervisors, and returning to Rikers Island for the sixth straight year of roundups.”

Martin Lowney, director of the Agriculture Department’s Wildlife Services program, said last week that research had shown that resident Canada geese in several New York studies “stay within five miles of a particular location” and that 74 percent of wildlife strikes occur at or near the airport. Removing the geese will improve public safety “without harm to the species as a whole,” he maintained.

Informative articles about humane goose population control measures and other issues brought up in the story above.